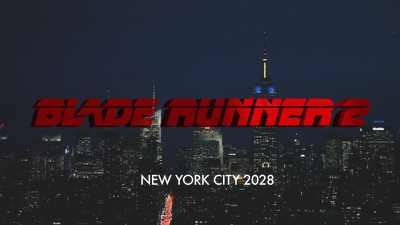 When we look through the eyes of a replicant, or a blade runner, a merchant, or little people, we see Blade Runner in the world around us. Whether it be the architecture of a building, or the lights downtown on a rainy night; it conjures up a particular feeling that has come to be tagged Blade Runner-esque.

After thirty years, Blade Runner still continues to influence artists across the broad spectrum of creative expression. It has been rendered in the visual arts; in painting, sculpting, computer animation, architectural designs and even in fashion design. We can experience Blade Runner virtually in video games. We can listen to Blade Runner-inspired music. This paradigm has been presented in live theatre productions, in dance recitals and on home video productions. And writers across the web have kept the story of Rick Deckard and company alive in fan-fiction.

The ultimate expression of Blade Runner fandom is when it is presented on film–referred to as fan film. Fan filmmakers have traditionally been amateurs. But, this medium has also been used to showcase the talent and expertise of a seasoned professional, while paying tribute to their hero or inspiration. Those who have undertaken the task of producing a fan film know that it is no easy feat. Some don't get beyond the storyboard; some meet their doom during their production. But, this doesn't deter others from following through with their creative tributaries. Such individuals are filled with faith and passion; faith in themselves, and a passion for what they do. And I have met such a person–albeit virtually–who is doing just that; producing the fan film, Blade Runner 2–a sequel.


In 2006, Matt moved to NYC with his family from Baltimore, MD with the intent of taking his acting/directing career to new heights. In Baltimore, he had some success as an actor and was directing film shorts with some regularity, but felt he could go no further there.

“Moving to NY, I increased my cost of living considerably,” Matt explained. “And without knowing anyone in the city, I launched my freelance career in acting and directing, and picked up camera jobs to compensate for the directing and acting work that was not as plentiful as I had hoped. It became a struggle to pay our enormous bills that came with being near NYC at the end of a false housing boom.”

Two years later, in September 2008–during the financial crash–he was shooting a Food & Wine show on the 50th floor at the World Trade Center, building 7 (the new one). “The sunset was spectacular, and with the Jersey City Goldman Sachs Tower in the distance, and the World Financial Center building pyramid across the street at window level, it looked just like Tyrell’s office in BLADE RUNNER. I brought my video camera the next day and grabbed a few shots so I could show some friends; I was flooded with a concept for a sequel. The plot developed after revisiting the original film. As a filmmaker, I could at least make a BLADE RUNNER sequel as a vehicle for my stalled acting career and capitalize on my Harrison Fordiness. I can do the voice and the mannerisms, so why not; no one else was doing it.”

Matt sat on the idea for a few years, frustrated that he had not made any movies or shorts of his own since his move to NYC. “I wrote a cop show based on my dad’s life as a homicide detective, THE SOCIAL WORKER, but I've had trouble getting it seen by a major studio ... or any studio. I had made several short films in Baltimore, but not a feature. I directed a ton of 48-hour film festival shorts and won something every time. I knew how to make a good story, but making a living at it was another thing all together. I telephoned and emailed ScottFree and Alcon Entertainment in March–when I heard they were making a sequel–but they had no idea what they were going to do. I tried to get someone to listen to my plot idea, but I could not get past the interns manning the front desk.”

Despite the cold response from the Blade Runner Partnership, Matt forged ahead with his production. And in September 2011, he began shooting some scenes. “I had a well laid out plot; a rain coat; a Harrison Ford Guy, (me); the PKD prop gun from an FX guy; a CG guy I knew from a Star Wars short I was in, “PITCHING LUCAS” (2007 Comic-con winner); and a few friends who were willing to help and loan me their apartments for locations. People were very generous with their time, property and homes, and very supportive that I was excited about making something I believed in.”

Matt shot some test shots of Deckard, (himself), running around in the rain in Chinatown; Times Square; drinking in a hotel bar (with the shakes); riding in an elevator; and of course, reading the newspaper in the rain. “If you have been to Times Square lately you will see that it looks like the BLADE RUNNER set on crack.”

He then wrote a couple of small scenes off of his plot line and recruited some of his actor friends to run the scenes. “I would shoot and light, and have another friend run the camera if I was in the scene. My Special FX friend had an arsenal of movie and theater weapons I could use in a scene, and another friend had a large apartment in Tribeca. I knew what lines I wanted in the trailer, but as we were all set up, I would run through a whole scene. Then I edited a rough cut trailer with the footage I had acquired.”

But, filming didn't come without its difficulties, as Matt explains. “Many of these location shoots were rushed or were cancelled at the last minute by crew members being sick, relatives dropping in, renters being off their meds, traffic, you name it. I work fast, but getting 3 hours to shoot your 12-hour day is what it is, you deal with it. My CGI guy had to pull out because his day job was getting frantic and CGI takes a long time and he would be starting from scratch. I got on the Internet right away and found this guy, Patrick Parenteau, in Montreal, that had already made 2 shots, the SPINNER landing and the message blimp. I emailed him. He said he had been approached before, but the projects were not up to snuff. Then I sent him the scene with Rachel in her loft and he sent me what I needed, and is willing to do more if I can get some traction with this project, THANK GOD. I incorporated the CGI into the edit and it worked great.”

After posting the 1st trailer in November 2011, Matt ran into an old friend who looked a little like Sean Young–more so in make-up. “I asked her to play the real Rachael that Deckard meets, Tyrell’s niece, which the replicant Rachael was based off of. I had a couple of scenes written and she jumped right in. This really sold the project for me; she nailed it. And the Ridley Scott lighting trick, to “Put a light behind your actor and smoke it up”, rings true. It works every time. There is a lot you can do with a couple of Liko lights and a smoke machine. I have been a fan of his for a long time.”

What does Matt hope to accomplish with his fan film? “The dream scenario would be if Ridley Scott would let me buy him a scotch, light a cigar, and tell him about the idea, and bring me on as a writer or a stand-in for the already famous person they want to play Rick Deckard,” Matt confessed. “Why not? Or maybe chop my project up into a series of webisodes with financing from ScottFree or Alcon. Who wouldn't want that? $100K can go along way when you are used to $0. That wouldn't be so terrible. Maybe they would help me produce my original films and TV shows; there is no right or wrong way into the business. That is the rub."

The film picks up nine years after Rachael and Deckard leave LA. Rachael shuts down, and Deckard drinks himself into a stupor, knowing the authorities have honed in on the Nexus 6 homing beacon. Deckard is arrested for treason, but then sprung. He is brought to NYC at the request of the Tyrell Corporation–run by Eldon Tyrell’s brother; the real Rachael’s father.

The story has many moving parts that tie in with the original story, with details that the casual viewer may have missed. The plot gets very involved, filled with twists, turns, crosses and double-crosses–where Deckard finds himself making some difficult decisions between the law and love.

“I shot a scene last week that I am adding to the front of the trailer that is very disturbing, and asks the question if we should be executing our own creations. What gives us the right to kill something someone else loves just because the local authority considers it a risk? The Nazis tried this out and it was not very popular.  It also asks the creator / manufacturer when to draw the line and when to keep the law out of personal endeavors if they do not harm anyone else. Creation and law of man do not always mix well. You can read into this all you want, but every movie has messages that asks different questions of different people, and everyone can draw their own conclusion."

This fan film could be produced as a two hour film or spread out into webisodes that follow the Deckard story line. Matt is even open to suggestions from other Blade Runner fans. He wants to maintain the magic that the fans fell in love with 30 years ago. 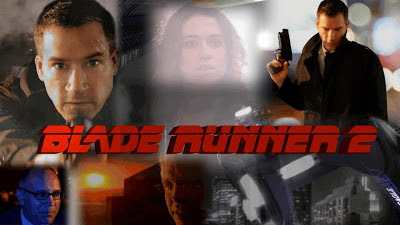