Tears in the Rain -- a Blade Runner short 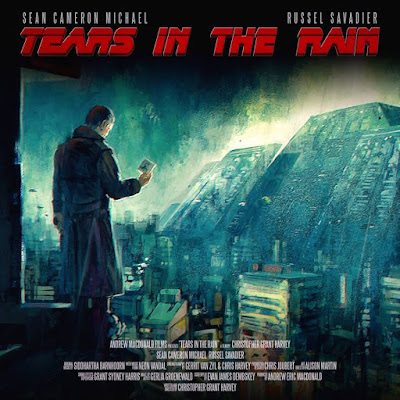 In a dystopian Los Angeles future, Replicants—genetically engineered humanoids—are created to work forced labour on Off-world colonies. The latest generation, the Nexus-3 series, begins to display erratic and violent behaviour. Replicants were not designed to experience complex emotions or develop long-term memories. In the wake of corporate scandals of the previous decade, the Tyrell Corporation quietly attempts to remove Nexus-3 from circulation.

John Kampff (Sean Cameron Michael), a senior engineer, heads up the Tyrell Retirement Division. With the primary objectives, detect and remove Replicants, John has suspected Nexus-3 Andy Smith (Russel Savadier) firmly in his sights. As John soon learns, Replicant detection is nearly impossible without specialist equipment. The Voight-Kampff, a polygraph-like machine used by retirement engineers to help in the testing of an individual to learn if they are a Replicant, is a distant thought in John Kampff's mind. 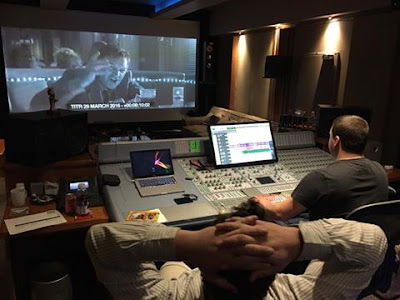 On Christopher Grant Harvey's website, he shared the following.


Making Tears in the Rain has been an arduous five-year journey. I had no idea what I was in for when I set out in 2012. A few years into the project I wanted to give up; I came very close. In fact, I gave up multiple times. I asked myself why this particular film was so important. At every stage, over the five year period, I sat with the project looming large and heavy over my shoulders. I would dedicate whole weekends in pursuit of perfection and wake up on Monday mornings only to be greeted by what I felt to be mediocrity. That said, there was a burning desire to succeed dwelling deep inside that didn't entirely burn out.

I first saw Blade Runner as an impressionable kid sometime in the very early 1990's. My dad had the 1991 'Director's Cut' on VHS (remember those?) Whenever I tore open the TV cabinet to escape homework, I reached for that tired copy of Blade Runner. The seductive John Alvin poster captivates you right from the get-go. The evocative score by Vangelis echoes in your mind as you wait for the VCR to finish rewinding. The collection under the TV included other well-known titles such as Indiana Jones, Back To The Future, Jurassic Park, The Terminator, RoboCop, Predator, Alien, etc. Everything you would expect from a kid born in the 1980's. This list is comprised of cliche after cliche. That being said, my influences extend beyond familiar pop culture. My friends were often jealous of my dad's collection, even though I would try to pass it off as my own. I doubt they believed me, but I felt like the movies were made just for me and that only I could appreciate them.

My grandfather, Rudy, had an even vaster and more mysterious collection. I spent a considerable part of my school holidays devouring movies at my grandparent's house. My grandfather had a locked room that housed his collection of films; he had almost any classic you could think of, and to a kid, it genuinely felt like Aladdin's Cave of Wonders. It was a forbidden realm filled with vast riches, magical objects, artefacts, and above all it was a time machine into the past as well as into the future. The cave can only be entered by an individual whose "worth lies far within"—the diamond in the rough. Those who made attempts to enter, otherwise, were killed almost instantly. Nobody but my grandfather was permitted to enter. It was during this indelible period that I cultivated my love for cinema and a lust to be a part of the filmmaking process.

Tears in the Rain is a short film set in the world of Philip K. Dick's novel Do Androids Dream of ElectricSheep? as well as the motion picture Blade Runner. The main plot of the book follows Rick Deckard, a bounty hunter who is faced with killing ("retiring") six escaped Nexus-6 model androids, while a secondary plot follows John Isidore, a man of sub-par IQ who aids the fugitive androids. In connection with Deckard's mission, the novel explores the issue of what it is to be human. Unlike humans, the androids are claimed to possess no sense of empathy. Blade Runner depicts a dystopian Los Angeles in which genetically engineered Replicants, which are visually indistinguishable from adult humans, are manufactured by the powerful Tyrell Corporation. The use of Replicants on Earth is banned, and they are exclusively utilised for dangerous or menial work on Off-world colonies. Replicants who defy the ban and return to Earth are hunted down and killed ("retired") by special police operatives known as 'blade runners.' The plot focuses on a group of recently escaped Replicants hiding in L.A., and the burnt-out expert blade runner, Rick Deckard (Harrison Ford), who reluctantly agrees to take on one more assignment to hunt them down.

When deciding the route to take with Tears in the Rain, it was our (myself and writing partner Evan) intention to focus on a singular idea for a story and work from there. It wasn’t until late in the writing process that the story was in good shape. We opted for a degree of maturity and focused our efforts on telling a story that had substance. It could have been pedestrian to pen a story about some bland hero who hunts down Replicants in a smoke-filled-rain-drenched city in a kinetic action chase scene. That certainly would be eye-catching and impressive, but the fundamentals of story and conflict should take preference. What has always been compelling about Blade Runner is the idea that Replicants are indistinguishable from humans. Rick Deckard could easily have killed a human by mistake. He ruthlessly hunts down these Replicants seemingly without empathy. Tears in the Rain is a “what if” story. What if a 'blade runner' retired a human by mistake––what happens then? We took that and wrote a story that serves as a loose prequel.

Five years on, I have learned many lessons. And they cannot be easily summed up in a neat list. The main take away is my desire to craft stories. I hope you can look past a minuscule budget and an extensive list of constraints and see the diamond in the rough. 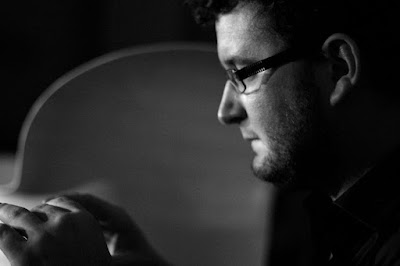 Without further ado, I am proud to present, Tears in the Rain.

Tears In The Rain (A Blade Runner Short Film) from Christopher Grant Harvey on Vimeo.


The music for the film was composed by Siddhartha Barnhoorn, with additional music [Decadent Sophisticates, Shinjuku Rose, and Neon City Tears] by Neon Vandal.