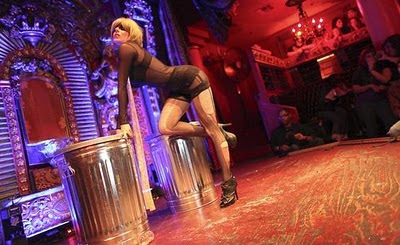 Ever wanted to see Pris from Blade Runner do a strip tease? Devil's Playground returned to Bordello for its monthly burlesque and cabaret show, this time with Ladies of Sci-Fi Burlesque, featuring characters inspired by Pris from Blade Runner, Ripley from the Alien franchise, Maria from Metropolis, Aeon Flux, Barbarella and Metroid's Samus Aran.
Some images may be NSFW.
Game Trailers - E3 2011 - AOTS Exclusive
Catch the ladies at Bordello again on October 9, 2010 for Scream Queens Burlesque.
(Zhora would have been the better choice, imo) ;)
Posted by C.A. Chicoine at 11:07 AM No comments: 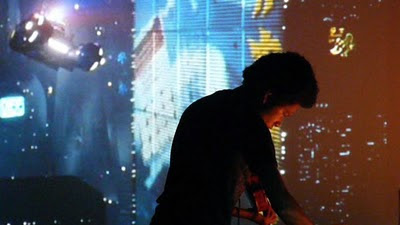 One of the most distinctive audio/visual performers to date, violinist, producer and film-maker Zan Lyons’ stunning shows have received critical acclaim across the globe as explosive beats collide with melancholic concertos.
Using his laptop and custom foot pedals, Zan loops his violin, voice and sounds while manipulating his haunting visuals to incredible effect. Zan’s film-making process retains the organic approach established by his music. A one man army, Zan directs, shoots, edits, and lights everything himself as well as doing all of the complex animation and visual effects work.
The result is hypnotic and otherworldly, bringing a truly cinematic vision to the audio/visual world. His films have quickly earned Zan high profile recognition with nominations from Lux and the London Short Film Festival and screenings on MTV2 as well as the Cannes, Onedotzero and Raindance Film Festivals.
Recently, Zan has performed with the likes of Battles and Chris Clark as well as collaborating with Warp Records’ Leila and Nicolette. Impressed by Lyons’ unique audio/visual outlook, the UK’s Latitude Festival invited Zan to remix Ridley Scott’s Blade Runner. This ever-evolving live reimagining of Scott’s classic sees lyons cut up scenes from the film-splicing in his own work in the process and replacing the soundtrack with his own score.
‘Zan Lyons vs Blade Runner’ has since been performed at: Berlin’s Berghain club; the Big Chill Festival; BFI Southbank; Tresor Berlin; Palma De Mallorca; LEV festival in Spain and the UK’s Leeds Festival with further performances planned for 2010/2011.
Visit Zan Lyons’ website for more music, videos and photos: ZanLyons.com
Now booking for Zan Lyons vs Blade Runner Audiovisual performances. Please email agency@thecentrifuge.co.uk with offers stating date, location, budget and other artists on the bill.
Posted by C.A. Chicoine at 10:28 AM No comments:

UNION MOVIE NIGHT: BLADE RUNNER - The Director's Cut
206 South Union Street
Alexandria, VA 22314
240-515-4291
October 16, 2010
8:30PM
Come join Union 206 for their second film night! This is the second installment of their monthly film nights.
Grab a seat, grab a drink and popcorn, and watch classic films on their cyc wall! Afterwards, you can relax with great conversation about the film.
This is 21+. They provide wine, beer and popcorn!
8 pm doors - 8:30 pm film
FREE!*
Please RSVP so that we have a nice head-count!
Shoot them an email or you can leave them a comment to RSVP!
*They'd accept donations to help cover costs!!
Posted by C.A. Chicoine at 8:31 AM No comments: 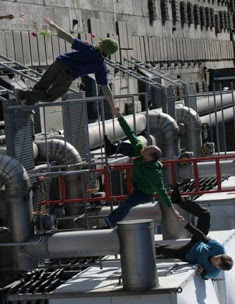 "In much of Kaiel’s work, the dividing line between dancers and spectators is shifting around, as you go along. The audience is not only looking, but is also being looked at."
Drawing from the sci-fi film classic Blade Runner, Erik Kaiel, together with his dancers plus students from the Toneelacademie Maastricht, throws up pivotal questions in his choreography of the same name.
Whom will we accept? And whom will we reject, and for what reason?
In 2009, Kaiel won the Dutch Dance Festival Award. He did so by using undiluted new styles of movement, such as break-dance and free running.
In Blade Runner, the performers turn the venue of an abandoned woodwork factory into one big opportunity for making daring moves. The spectators tag along after the dancers, as they make their journey of exploration around the vacated industrial building.
The piece will be performed on October 2, 2010 at 13.00 h and on October 3, 2010 at 12.00 h in the Timmerfabriek, Maastricht during the Nederlandse Dansdagen.
To see some of their rehearsal photos click here and here.
Dutch Dance Festival
On October 1, 2 and 3, the historic city of Maastricht will be once again the backdrop for the Dutch Dance Festival (Nederlandse Dansdagen). No better opportunity exists to savor the best that Dutch dance has to offer! This event will showcase a wide range of dance styles and artists – from up-and-coming choreographers and urban dance makers to world-renowned dance companies.
You can buy the tickets for the Dutch Dance Festival at www.theateraanhetvrijthof.nl. Or you can also buy them over the telephone: +31(0)43-3505555.
Posted by C.A. Chicoine at 12:26 PM No comments:

Blade Runner on the Big Screen

All the stage is a world

The intersection of stage and film — the future of entertainment?

In an article written by Chris Conrad of the Mail Tribune, he writes how the film-to-stage experiment intrigues him. He mentioned a few movies that critics already consider "stagey", and then threw in his own picks. Among his picks was Blade Runner.

In any event, the columnist goes on to write, “My heart would swell and burst if some intrepid director could bring "Blade Runner" to the stage.” He’s certainly passionate about his conviction with wanting this "science-fiction stage show".

I must say, personally, I think it would be an awesome endeavour. If done cleverly, it could very well be the next best thing. Of course, there will be those against such an idea, just as there are those against a re-make, sequel or prequel. But, this would be different.

I was fortunate enough to be involved in a project that came close to the idea of bringing Blade Runner to the stage. I wrote lyrics to the splendidly crafted music of Marco Spatuzzi. And it was performed live, along side the movie Blade Runner, (link below).

Looking at some of the movies or television programs that have been adapted to musicals on Broadway might give you an idea of the possible success such a venture could have. Just to name a few:

"All the stage is a world" article by Chris Conrad.

Your Precious Photos of Blade Runner

This Flickr group is dedicated to the movie Blade Runner, and has been set up to allow fans of this movie to post their favourite pictures associated with this movie.

Don't let those moments be lost in time like tears in the rain...
Memories, I'm talking about memories...
Posted by C.A. Chicoine at 9:15 AM 3 comments: