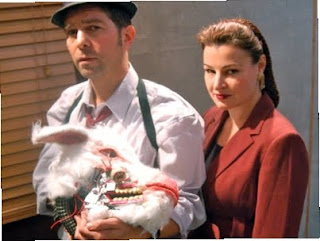 UNTITLED THEATER COMPANY #61
Presents:
UNTITLED THEATER COMPANY #61 TO HOST FUNDRAISER
TO FREE ANDROID SLAVES ON MARS
Tickets $40
Call 212-352-3101
Or visit www.untitledtheater.com
On December 4th, 2010 Untitled Theater Company #61 (UTC61) will host a benefit for the Free the Androids movement, a movement devoted to the plight of the enslaved androids on Mars. UTC61’s current production of Do Androids Dream of Electric Sheep?, a stage adaption of the Philip K Dick novel, which runs at 3-Legged Dog November 18th through December 12th was the inspiration for the fundraiser. Proceeds may also be used to help benefit the theater company.
When asked what first led him to consider the plight of artificial intelligence, Artistic Director Edward Einhorn said, “The more I dug into the material, the more aware I became of the plight of androids on Mars. We on Earth know only those androids who have escaped and gone rogue--driven rogue, I should say, by their enslavement. Mercer teaches us empathy for sheep, but what of electric sheep? What of electric humans? Empathy should extend to all.” When asked to comment on the rumor that Buster Friendly himself would leave his studio to appear at the event, Einhorn declined to respond but did note that “This will be a bounty hunter free zone. Androids can feel free to attend with an assurance of their own safety." All androids and sympathizers are welcome to come dressed for the occasion.
The fundraiser will take place following the December 4th performance of the production at 3-Legged Dog located at 80 Greenwich Street, New York, NY. Tickets for the fundraiser are $40; a limited number of theater-fundraiser tickets are available for $50. Tickets may be purchased at www.untitledtheater.com 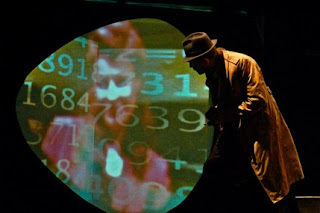 UTC61 is a Theater of Ideas: scientific, political, philosophical, and above all theatrical. UTC61 previous productions and events have included Cat’s Cradle, a calypso musical based on the book by Vonnegut; The Václav Havel Festival; the NEUROfest (plays about neurology); the Off–Broadway production of Fairy Tales of the Absurd; and The Velvet Oratorio, which premiered last year at the Walter Bruno Theater at Lincoln Center.
Posted by C.A. Chicoine at 10:19 PM 1 comment: 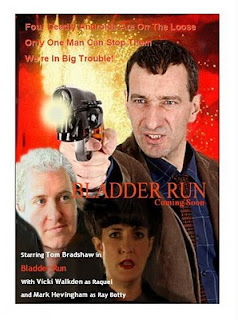 We need your help to complete Bladder Run - a homage to Blade Runner.

Rex Dickard is a retired bounty hunter living in a sprawling city of the future. He is brought into the headquarters of his old boss, Frank Brian, by a new bounty hunter, Guff. There Brian briefs Dickard about four deadly escaped androids, Junior; Nora; Pritt and Ray Botty.

Dickard agrees to take on one last case, and begins his investigation at the Lorell Corporation, where he meets Raquel a repressed nymphomaniac and top of the line android.

As his investigation proceeds, Dickard encounters the various androids and his quest ultimately leads him to a show down with Botty - the overweight psychotic whose wobbling blubber guts - squeezed into lycra cycling shorts - are the most horrifying aspect of the entire story!
The Movie

Bladder Run began life as an 8 page skit written in response to the so called "Director's Cut" released in the early 1990s. Writer/director Mark Hevingham was lucky enough to see a sneak preview of the original 1982 release and has been a fan ever since. Having expanded the plot to a full 90 minute feature - and pushing it through over 25 versions until he was happy with the plot - took over a decade and the movie began to take shape in 2008 when Mark assembled a cast and crew.

Setting out to make copies of classic Blade Runner props and costumes was only the beginning. The movie grew from a project that could be filmed over a weekend into a full production with lights, HD cameras and authentic locations loaned by local businesses. During the first half of 2010 scenes were filmed that replicated the Tyrell building (Holdall interviews Junior, Dickard meets Raquel), Taffey Lewis' bar, the fight scene in the street and so on.

People such as www.bladezone.com, Charles De Lurizika and Paul M Sammon have previously metioned there support this project.

Heres a sneak peak of one scene in a VERY EARLY CUT
http://www.facebook.com/#!/video/video.php?v=16...


The following is a rough cut before grading, sound mix and FX smoke etc added
http://vimeo.com/15285296

Sadly the owner of the HD equipment, including lights and mics, was forced to drop out in the fall of 2010 due to work commitments, leaving us with 30% of the movie completed and nothing with which to complete photography. What will we spend your investment on?

This is where your funding will go. If you are willing to donate, we will purchase (its too expensive over a long production to hire) the following equipment:

Lights - including spots, floods and diffusers

Location hire - this will be the rest of the amount and will eat into the budget and with a venue costing up to $500 a day you can see that we need to be creative and negotiate.
What you get

Any donation of $50 to $249 will be credited on the movie, and receive a DVD or Blu-ray of the completed film

Any donation of $250 - $499 will be credited on the movie, and receive a double disc version DVD or Blu-ray of the completed film, signed by the cast and crew, and be entered into a draw to win an original costume (Raquel's shades of gray two piece suit a unique one of a kind piece)

Any donation of $500 - $999 will be credited on the movie as a producer and receive a double disc version DVD or Blu-ray of the completed film, signed by the cast and crew, and be entered into a draw to win an original costume (JFK Sebastud's "harlequin" jacket - a unique one of a kind piece)

Any Donation of $1000 to $5000 will receive an executive producer credit, a copy of the THREE DISC limited edition DVD or Blu ray which includes several shorts, out takes and documentaries not available anywhere else - plus a version of the movie showing a "lost" cut of the film with no voice over and different music. You will also be entered into the draw to win the ultimate Bladder Run fan package - one of a kind props and costumes bundle including Ray Botty's coat (a copy of the leather duster worn in the original movie) Dickard's tie (an EXACT copy of Harrison Ford's ties, The Mein Kampf prop based on Blade Runner's Voight Kampf machine plus a signed soundtrack CD selection which is limited to ONE copy EVER, which will come with a signed certificate. Finally you will win one of the three Dickard blaster guns which has light and sound FX built in

Here is the link to donate: http://www.indiegogo.com/Blade-Runner-homage-and-spoof-called-Bladder-Run

HOW ELSE YOU CAN HELP

Spread the word! If you could direct people to