"Sara Campbell's "Two Faces" gives us a unique look at the world of the BLADE RUNNER. Consider most carefully the title of this vignette -- and then prepare yourself for an ending that will twist around all your preconceptions of the universe presented to us in that most complex and fascinating movie."

--The 2014 Philip K. Dick Festival date and location has been set: April 25-26, 2014 -- UC Irvine in Irvine, California. A Facebook event has been set up for this festival in addition to the Facebook page that has been used for the two previous conferences.

--An early charcoal production sketch depicting a scene that takes place in the "sidewalk diner", later known in the final film as the "White Dragon noodle bar". The sketch is from the great Mentor Huebner (1917-2001), production illustrator on the film. More HERE. 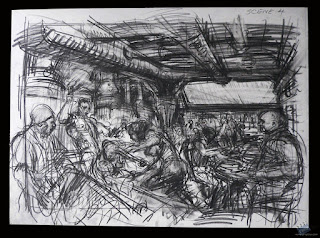 --Brandon Bye reviews the book, "Practical Classics: 50 Reasons to Reread 50 Books You Haven’t Touched Since High School," by Kevin Smokler. Among the books to reread? Well, read HERE to find out. 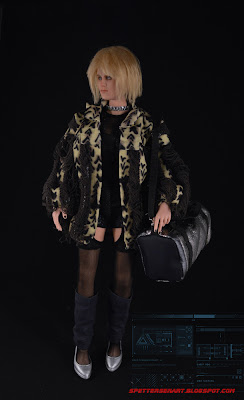 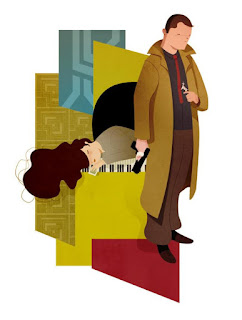 For several years, MOVIEBARCODE has compressed entire films and famous film sequences into barcode-like images where the lines represent frames from the movie. There are hundreds in the archive and prints are available too. Seen here at top, Blade Runner. And here's a Movie Barcode Generator so you can do it yourself! (via @death_waltz_records) 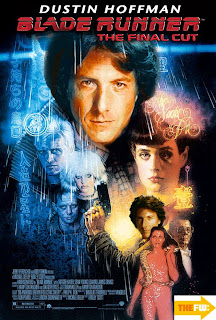 From, 9 Movie Posters Featuring Actors that Almost Starred in the Films.

Back in December 2012, Adam Savage talked about his obsession with the PKD Blaster. The video is below.


From Super7Store -- “BIT RUNNER” t'shirt stylized in an old school video game that never existed (but should have)! 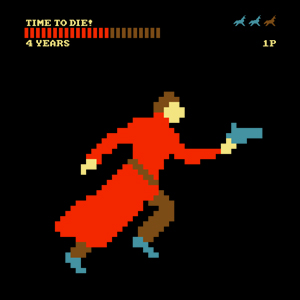 Use the coupon code OFFWORLD to get 50% off the price of the shirt (making it only $15). This offer was put together exclusively for OFF-WORLD NEWS followers! LIMITED TIME (30days from this posting) Shop HERE! (Thanks Frank!)

And remember to follow @OffWorldNews on Twitter to receive these and other Blade Runner related news items, (including movie showings, specials, and auction items not featured in this newsletter), as it comes in. And you can follow us on Pinterest.

NOTE:  To those Blade Runner/DADoES enthusiasts that create articles, art, music, or videos; please submit them to Kipple@KippleZone.com if you'd like them to be included or mentioned in the OFF-WORLD NEWS. At present, the OFF-WORLD NEWS is coordinated by one person -- ME! I don't always have the time to scour the net in search of material for this newsletter -- as a result, I miss some fantastic fan-creations. And I can't always stay up-to-date with the on-going fan projects. So, please help me help you!  ~ Craig
Posted by C.A. Chicoine at 7:55 PM